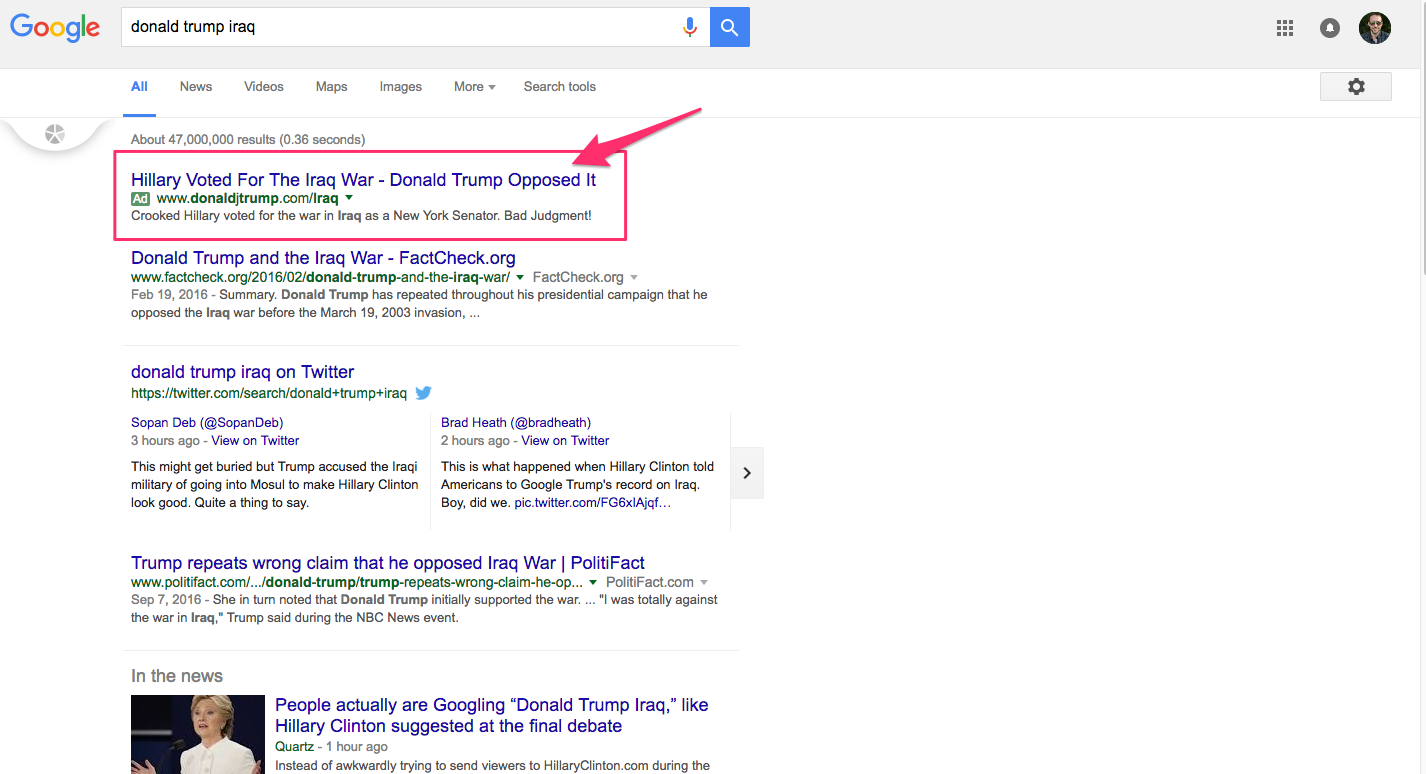 Trump’s online marketing team was on point during the presidential campaign.

Regardless of how you voted, I’ll present a fun case in point.

And boy did they.

Now, as someone who does SEO day in and day out, this immediately sent a shockwave through my brain. The first thing I think is “how can I somehow get a piece of that traffic.”

I did what I always do in this situation which is to immediately head to a domain registrar to see what exact-match type domains are available.

An “exact-match” type domain is one with the keyword search terms in the title, exactly. Example “philadelphiaplumber.com.”

I scooped up two domains and immediately wasted about twenty bucks. I’ll explain why in a moment.

If you look at the Google trends data, you can see that there was an enormous spike after she spoke the words: But then, it completely levels off into nothing.

Now, if you somehow had already ranked number 1 for this phrase, you would have surely seen an enormous amount of traffic pour in, possibly crashing your server.

Not thinking like a smart SEO, and more like a dope, I should have of course realized that no one will continue to Google “Donald Trump Iraq” en masse. Searches might trickle in from debate replays but this ship largely sailed minutes after the statement was made.

Regardless, I quickly setup a website on one of my domains which had nothing but some ridiculous images and a few Halloween advertisements.

I then attempted to buy some Google AdWords campaigns to see if I could maybe sneak to the top and steal some incoming traffic and make an ROI.

But low and behold, who was there… Someone on Trump’s team, like a savvy ninja, immediately secured this keyword with a nice enticing title to funnel all of that traffic where they wanted it to go.

You’ll notice that there were plenty of articles just below, most from earlier in the year, but establishing a presence right at the top with a strong title ensures that you will get a lot of clicks.

There is no page on Trump’s site at this location. It’s a vanity URL. This means that someone was so on point, and so aware of the traffic surge here that they IMMEDIATELY deployed an AdWords campaign to send the traffic WHERE THEY WANTED. This is using technology to its fullest extent.

This is awareness of the highest order.

I messed around a bit to see if I could outbid Trump.

Looking back on it, that is probably one of the stupidest ideas in history.

I’m going to outbid a billionaire in an auction situation?

I did manage to get my ad on page 1, which burned over $100 so fast it was beyond foolish to even attempt something so stupid.

If you know how to use the force, you will be a force to be reckoned with…

Anyone want to buy some worthless domains with a billionaire’s name?

Like politicians, most businesses wish they could be heard by everyone. Make sure your business is on the first page by working with WitBlade, the top Philadelphia SEO agency.

Whether you are a local business, large ecommerce store, or just need to attract more potential customers to buy, we can help you!